Last Updated on November 2, 2022 by Nicholas

My grandmother has been working on her feet, in high heels, for most of her adult life. As a result, she not only became used to dealing with pain but also developed arthritis. My problem is that she is so used to working through the pain that she refuses any treatment of her arthritis so what I have resorted to was to change all of her regular insoles with special insoles for arthritis.

While she would never admit it herself, the difference in her step, the obvious lack of discomfort, and even the fact that she no longer groans in relief when she takes her shoes off tells me that the insoles have made a significant impact.

How Do Insoles Affect Arthritis Pain and Discomfort?

The majority of patients with arthritis have ankle or foot pain during the course of the disease. This affects their stability while walking, which further leads to foot deformations. These deformations are caused when patients put more pressure on certain parts of the foot while walking, to avoid those areas that induce pain.

As a form of therapy, and in avoidance of surgeries, special footwear was developed to aid patients. These are called shoe orthotics, insoles, or shoe inserts.

Insoles can be made from several materials such as foam, gel, leather, and air cushions. These materials can be inserted inside the shoe to provide arch support, pillowing for the whole foot, and even a thick heel. The best part is that these inserts can be customized according to specific needs. There are several benefits to using insoles

They reduce pain while walking. You can think of this pain like the one you feel after a round of o rigorous session at the gym. The next morning you cannot move because every part feels stiff. The difference in arthritis is that the stiffness is constant and gradually increases instead of getting better.

Not only is pain reduced, but the step length is also improved. This means that a person can take longer steps rather than short ones taken to reduce discomfort. Because of this, less energy is spent on walking and thinking about the pain each step causes. Walking itself is necessary to increase blood flow to the feet and get some exercise. The slow and steady movement will also get you used to walk around more. 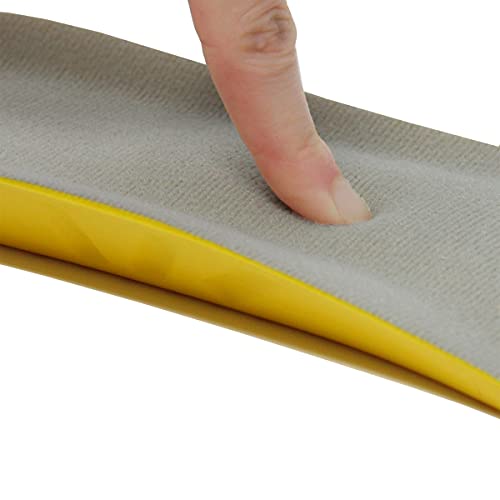 If you have a routine that involves a lot of standing or walking around, foam memory soles will change your life. Once you have them, you can remove the insole already present in your shoe and replace them with this.

If they are too big, they can be customized according to your size. You can mark the edges which are too big and can cut them off without damaging the shape or structure of the insole. The advantage here is that instead of getting different sizes, one size can be tailored exactly to your own size. They will fit inside any shoe or boot for maximum comfort.

At this point, I should mention that I used to work in a retirement home. There were several elderlies there that suffered from arthritis. A few of them started using Happystep Orthotic Memory Foam Insoles, and they swore by it.

According to them, they are the perfect amount of soft, but firm in the places that matter. Walking with them is what you imagine walking on a cloud will feel like. After continuously using these for two months, a few patients realized that the throbbing knee and ankle pains they had, gradually lessened till they became very manageable.

Even just the area under the foot was relieved from aches. They also said that the inserts do not wear down easily. Even after regular use, they are still in pretty good condition and no one feels the need to replace them. 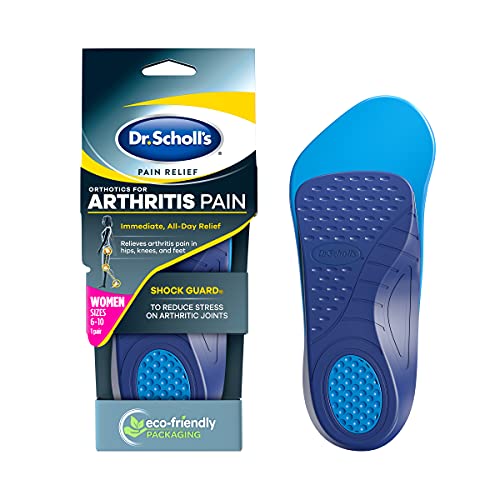 These insoles have been designed with the specific purpose of relieving knee, foot, and hip pain, caused by arthritis. They are easy to use as all you have to do is insert each orthotic into their respective right or left shoe.

There is no need to adjust their size as they mold themselves according to the shape of the footwear. Their distinct feature is their shock absorption function. Because of constant wear and tear, tissues in joints break down which causes immense pain.

When you walk, this pain gets aggravated. Dr. Scholl’s orthotics work in a way that cushions the shock originating from walking and provides support to the joints. With this added support, discomfort is diminished.

So, a lady at the old home, we can call her Ms. Q, had severe hip pain. On most days, she preferred just lying in bed to avoid the pain caused by walking. This took a toll on her mental and physical health as she used to be very active before arthritis worsened.

She would go for a walk daily, with her dog (her name was Griffin), accompanying her. They would stay in the park for a few hours and just enjoy the day. But now, she had to give away Griffin because she could not manage those daily trips.

When these insoles were suggested to her, she quickly took them up so she could go breathe in some fresh air. While they are not a cure for arthritis, the orthotics helped her bear the hip pain, and she eased back into walking again. 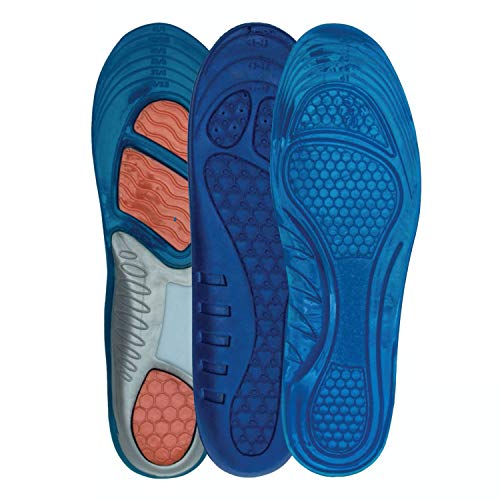 Do you know what is better than one layer of insole? You guessed it, three layers of insoles. This massaging technology is developed in a way that provides three times the comfort and support. They are especially designed to fit the needs of women who need heel support.

The first layer is a gel, the second is a full support gel arch, and the last is memory foam. Not only does this easily grip any shoe it is inserted into, but while you walk, the insole shapes itself according to the contours of your foot. This allows for maximum cushion and the effect of walking is reduced to a minimum. The size of these insoles can also be adjusted by trimming the sides.

Unlike a desk job where you can sit around all day, teaching requires you to be on your feet for 6-7 hours. There were two ladies at the senior citizen home, who were in their 60s, but still had a passion to change the lives of children.

They purchased Dr. Zen’s orthotics which considerably improved their movement. They could stand around for longer periods of time and feel minimal discomfort at the end of the day. 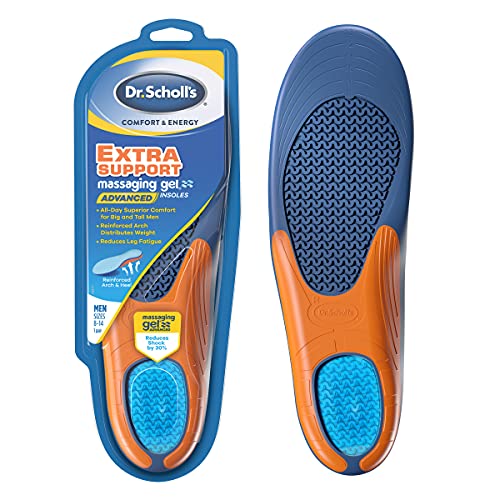 There are many disadvantages to being tall. While you might be able to reach high shelves (short people unite to form a ladder), you are prone to develop back, hip, and leg aches. Dr. Scholl came up with a solution distinctively for all the tall men out there.

The gel in this variant makes moving around quite easy as it massages the areas that are prone to feel more pressure. They provide a lot of arch support as the insoles have high arches and make it bearable to move around all day.

My uncle is a big man. His height nears 6’5, and he also holds a lot of mass in the abdomen area. Since he works in a fancy law-firm, he not only has to wear uncomfortable dress shoes, but also move around in court wearing them. Recently, the initial stage of arthritis had started to present itself.

Now, my uncle cannot sit still, and he loves his job more than his children. He was recommended Dr. Scholl’s extra support insoles and for him, these are pure heaven. Ever since he has been using these, he said his back aches have been occurring less frequently, and he barely feels the movement throughout the day. 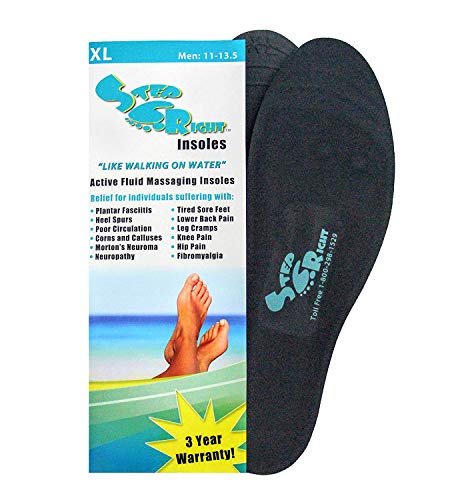 It has become a necessity to walk to most places because of the immense traffic jams. Walking around all day wears down your joints and more often than not, leads to aches in various parts of the foot. Step Right is designed for everyday use.

This is the equivalent of tying pillows to your feet while walking around, except more practical, of course. The padding evenly distributes weight across the whole foot which absorbs the impact of the movement. These inserts are meant to prevent cramps, calluses, and various joint pains which result from moving frequently.

Their distinct feature is that they are made from a velvet-like material that does not let moisture into the shoe. The dryness provides added ease, and minimal chance for your footwear to smell rancid.

While I am not diagnosed with arthritis, I do move around a lot all day. Usually, my preferred piece of footwear is joggers. I had recently started noticing that the flesh under my toes was sensitive throughout the day and hurt when I walked barefoot. My heel had also started to ache when I walked over long distances.

I decided to try Step Right because of a recommendation. The sensation I felt when I first used them, can only be described as akin to walking on water. Slowly, my blisters started to disappear, the pressure on my toes subsided, and if you asked me to climb a mountain with these inserts in my joggers, I would. 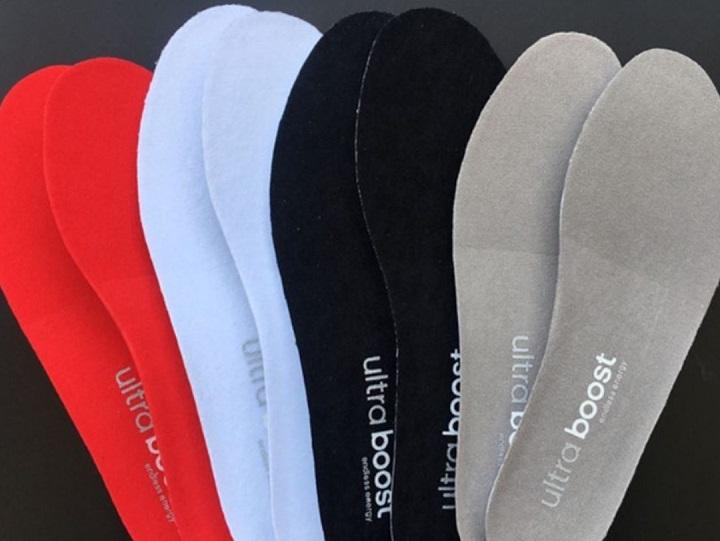 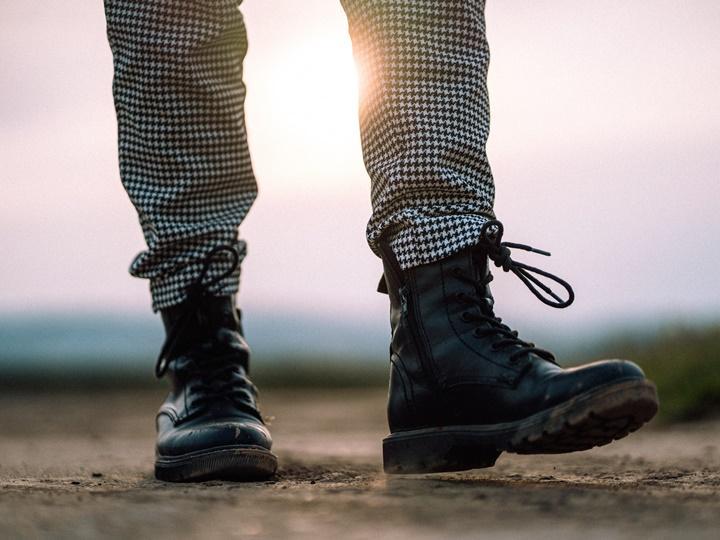 View all my posts